Halo 3: ODST (originally Halo 3: Recon) is a 2009 first-person shooter video game developed by Bungie and published by Microsoft. It is part of the Halo franchise, and was released on the Xbox 360 video game console on September 22, 2009. Players assume the roles of elite human United Nations Space Command soldiers, known as "Orbital Drop Shock Troopers" or ODSTs, during the events of Halo 2. In t... See morehe game's campaign mode, players explore the ruined city of New Mombasa to discover what happened to their missing teammates in the midst of an alien invasion. In the "Firefight" multiplayer option, players battle increasingly difficult waves of enemies to score points and survive as long as possible; the Halo 3 multiplayer experience is contained on a separate disc packaged with ODST. New copies of the game also contained access keys to the Halo: Reach multiplayer beta release.

Bungie initially conceived ODST as a small side project to produce in the lull between Halo 3 '​s completion and Halo: Reach. Instead of featuring recognizable characters such as armored protagonist Master Chief, the developers focused on the ODSTs. Story director Joseph Staten penned a detective story utilizing film noir designs, settings, and characters. Composer Martin O'Donnell abandoned his previous Halo themes to create a quieter, jazz-influenced sound. During development, the planned expansion grew in scope to that of a full-sized game. Release marketing for the game included a tie-in comic, live-action trailers, and print and web advertisements.

Upon release, ODST became the top-selling Xbox 360 game worldwide. The title received generally positive reviews from critics, who praised the atmosphere, music, and story approach. Reviewers were divided on whether the relatively short campaign and included extras were enough to justify the game's US$60 price tag. The game was the top-selling title in the United States in September 2009, and sold more than 3 million copies worldwide. Softpedia, Time, and Wired were among publications that declared the game one of the year's best. 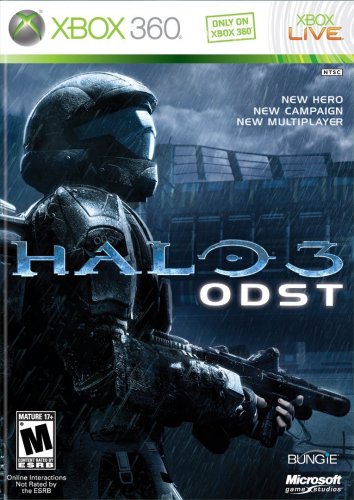