The third instalment in Nintendo's popular Super Smash Bros. fighter franchise debuts on the Wii in Super Smash Bros. Brawl. Loaded with all the characters and features players have loved from the two previous versions, plus much more, it is a worthy addition to the series and yet another must-have title for the Nintendo Wii. Engage the rage with Super Smash Bros. Brawl! The third instalment of th... See moree incredibly successful Super Smash Bros. series is now on the Wii, The roster islonger than ever, but that just means more butt to kick across over a dozen different, graphic-rich stages with original moves, new modified moves, and a brand-new super attack called Final Smash! Old favourites like Mario, Link, Peach and Kirby are now joined by such exciting newcomers as Wario, Solid Snake and Sonic the Hedgehog. With a variety of new modes, an absolutely epic soundtrack and the ability to play with distant friends through online multiplayer, this is a game you'll have to break your own fingers to put down. Original soundtrack from 36 different artists Online Multiplayer. See your favourite Smash Bros. character, redesigned from their most recent games, brawl onto your screen once again! A host of new characters to fight with, including Sonic, Pit from Kid Icarus, Wario and Diddy Kong. More than a dozen gorgeously-rendered stages. New special moves and attacks, including the groundbreaking Final Smash. New items and assist trophies. 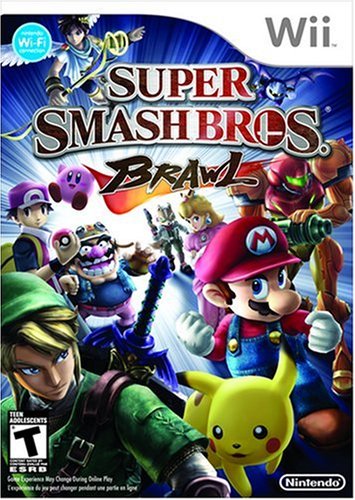