Raven Shield's story begins in 1945, as two members of the Nazi-sponsored regime in the Independent State of Croatia manage to escape the country with huge amounts of Holocaust-era loot just before Allied troops move into the capital. Sixty years later, in 2005, elite multinational counter-terrorism task-force Rainbow finds itself investigating a series of attacks by Neo-Fascist terrorists against... See more South American oil interests and European financial institutions.

Rainbow eventually traces the source of the attacks to Argentina, where Argentinian billionaire businessman Nikola Gospic and far-right Presidential candidate Alvero Guitierrez are implicated. Rainbow learns that Gospic is an escaped Ustashe official, one of the two men shown escaping with Holocaust loot in the game's opening cutscene. Dying of liver cancer, Gospic plans to leave the world one last legacy of hate from the Second World War by using his vast wealth to resurrect global Fascism. To this end, Gospic has acquired a large amount of chemical weapons, including VX nerve gas and blister gas. 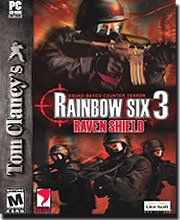