Illidan Stormrage has gained the allegiance of the Naga, former Night Elves who were magically mutated during The Sundering, and became strange, reptilian creatures. The Warden Maiev Shadowsong pursues her former prisoner, Illidan, across the sea, first to the Tomb of Sargeras. However, Illidan gains an artifact known as the 'Eye Of Sargeras' and wipes out some of Maiev's best soldiers. Forced to ... See morecall for help, she sends a messenger back to the mainland of Kalimdor. She asks the assistance of Malfurion Stormrage and Tyrande Whisperwind, but Maiev holds a grudge against Tyrande for her actions in releasing Illidan. Although they are able to chase Illidan to Lordaeron, while helping the Blood Elven prince Kael'Thas, Tyrande delays the advance on an Undead army that causes her to be swept away downriver: upon their reunion, Maiev lied to Malfurion, claiming Tyrande was killed in order to prevent Illidan's escape. Malfurion and Maiev prevent Illidan from using the artifact called the Eye of Sargeras, defeat his army and condemn him to death. Illidan tries to justify his actions by saying his plan was to use the Eye to destroy the Icecrown Glacier and kill the Lich King, thereby destroying their common enemy in the Undead, but Malfurion accuses Illidan of having indirectly causing Tyrande's death. Kael'thas then informs him Tyrande may have survived; Maiev's treachery comes out, and the brothers Stormrage join forces to save Tyrande. At this point, Kael'Thas supposedly takes a few more days to meet up with the human forces in the city of Dalaran, the exact same city in which they stopped Illidan. Malfurion then pardons Illidan after they save Tyrande, though he does not revoke his exile. Illidan then states that he could not join the Night Elves even if Malfurion did permit it, because his master will be enraged by his failure to use the Eye properly, and will hunt him down. Illidan departs for Outland, followed by Maiev. It seems as though Maiev would chase Illidan to the depths of the world, as she would do so. Malfurion then remarks that she has become 'vengeance itself'. 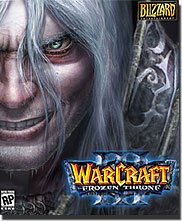